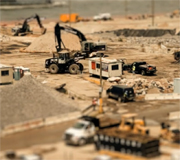 The Sandpit from Sam O'Hare on Vimeo.

A day in the life of New York City, in miniature.

SAM : “It is shot on a Nikon D3 (and one shot on a D80), as a series of stills. I used my Tamron 17-50mm f/2.8 and Sigma 50-150mm f/2.8 lenses for all of these shots. Most were shot at 4fps in DX crop mode, which is the fastest the D3 could continuously write out to the memory card. The boats had slower frame rates, and the night shots used exposures up to two seconds each. The camera actually has an automatic cut off after 130 shots, so for longer shots I counted each click and quickly released and re-pressed the shutter release after 130 to keep shooting.”

Wingsuit Basejumping – The Need 4 Speed: The Art of Flight by Phoenix Fly