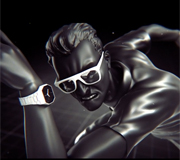 It’s time to present you a selection of Best Videos. If you want to share with us your work, design or photography send us a mail or via Twitter using #tutorialstorage in the end of the tweet.

Transformer is a big movie, C&C transformer is a huge 60 seconds commercial for road tractor, tipper & mixer, finale in 3-in-1 gigantic robot.
Various technologies were developed by us for the complex robotic transformation.
Massive computer power, visual effects was needed.

Rizumik is a rhythmic soul that expresses itself essentially through beatbox and percussion.

"Rhythm is all about the worlds compass. Everything exists within a cycle.
Every happening has its own timing and every action its own beat. I try to feel that clearly as time goes by.

I need to communicate the rhythm that i feel and that runs in my veins. It's like a language…
It comes out naturally, without much effort. It's a true and natural way of communication.

In this music, and in this video, we transmit energy, and fast changes.
We like to think of it as a conscious disorder of balance, as things go up and down…
It's the white and the black… the good and the bad… the yin and the yang. Contrast."

This time around we're honoring videos (and their amazing creators) in 13 categories, including four brand spankin' new ones. And because we believe creativity should be rewarded, we're giving away $5,000 grants to category winners and one $25,000 grand prize, all to help recipients make new work.

Submissions are now open, so go ahead — wow us. Vimeo.com/awards/submit

Music: "Bust This Bust That" by Professor Kliq (http://www.professorkliq.com/)
http://vimeo.com/musicstore/track/23013

It had come to an end at some point. Part three is now complete, and thus completes Practice Project.

My conclusion on this project is that it certainly achieved its purpose, and scored some bonus points in the process. Have learned techniques, styles and other goodies that could not before – and it is the essence of challenge yourself to be better. So, because my ego can handle it, I get an A +.

Part three is huge amount of frame by frame animation. Really pushed myself to do much more organic animation, and get it all to hang together. Although only 1 min. plus some change, it has really taken some time, and an impressive number of drawings. There have also been used 3D, mostly as reference elements, and tried adding sound effects.

I was lucky enough to team up with talent from Audioplum Studio (Lyon, France). They delivered voice-over. I am deeply grateful for their efforts.

Thank you, the end.

Music credits: Gramatik – In My Hood

We've edited our second reel with six new projects, including works for Liv Channel, Mtv Tr3s, IdN and the best three car racing categories in Argentina, and much more!

Start jumping to the rhythm of The Last Shadow Puppets!

Music: "The Age of the Understatement" The Last Shadow Puppets
(only used for this site, and without commercial purposes)

2012 – ID
Discovery Networks LatAm commissioned LUMBRE to create this transitional ID. As of July 9, 2012 in Latin America, LIV channel will be replaced by the new channel ID Investigation Discovery.

for other works, still frames, and behind the scenes content, please visit www.weareroyale.com

We recently created this music video for "Evil" by Howlin' Wolf as part of the Videophonic session at the 2012 PromaxBDA Conference. The catch? All of the nine videos could only feature music that rocked out pre-MTV. Most of us weren't even born then. Ha. We envisioned a Western narrative that felt more analog than digital. Our all-CG video featured high contrast white on black "scratch board" imagery.

Dreams…We love beautiful dreams.Even if there is just one dream repeating every night. But If we realize being stuck in one dream?

After the success of 2009 of restyling 5 shows for the Argentinean sports channel, TyC Sports doubles its bet and, taking advantage of the launch of its HD signal they trust us into developing 8 new program packaging.
To address this project on this scale, we added more help by working with the very best of the Argentinean broadcast design. In this way, we functioned as both, a studio and an agency, coordinating and directing the project as a whole.
There were 5 super intense months, sailing in a transatlantic between countless of lower thirds, statistical plates, plasma backgrounds, balls, boots and 3D stadiums!

Justin Bates is a Director & Visual Effects Supervisor currently based in London. Over the last 11 years Justin has designed, directed & produced high-end motion graphics and VFX for a variety of clients including, Adidas, Ford, Sky Sports, Sky One, T4, Gillette, Carlsberg, Cineworld, Learn Direct, Cineworld, Tiger Beer, Wolf Blass and Transport for London, among many others.
His work has also been recognised by The Royal Television Society, Promax / BDA Europe and Promax / BDA International. The Track is "Let Me Go" _by_Maverick_Sabre.
For further information please email.
info@justinbates.com

Institutional Video for the Open Government Plan of the City of Buenos Aires.